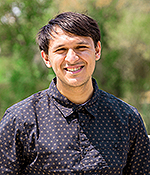 Gerald Lemmon is a first year and first-generation Ph.D. student at UC Merced. Originally from Prosser, Washington, Gerald sought a bachelor's degree from Central Washington University in Sociology and Women's, Gender, and Sexuality Studies. His prior research has stemmed from the existing disparity in Pre-Exposure Prophylaxis (PrEP) uptake among Latinx and Black gay and other men who have sex with men (G/MSM) and their social perceptions of the medication in the United States. Generally speaking, his research interests revolve around health (PrEP, HIV, and Mental Health), gender, and sexualities with an additional interest in mental health.