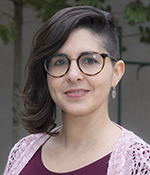 Amalia Pérez is a Ph.D. candidate in the Department of Sociology at the University of California, Merced. She graduated from law school at the University of Havana in 2009 and earned master’s degrees in Political Science and Sociology in Cuba, Ecuador, and the United States. She has published in edited volumes and academic journals such as Cuban Studies and NACLA. Her research interests include anti-austerity protest and resistance against neoliberalism in Latin America, community organizing, legal mobilization, political repression, intersectionality, political identities, discursive framing and storytelling, content analysis, and historical sociology. Amalia’s dissertation examines the paradoxical role of law in revolutionary and postrevolutionary times in Cuba.