Q&A: Sociologist with Specialty in Right-Wing Movements on Free Speech and the First Amendment 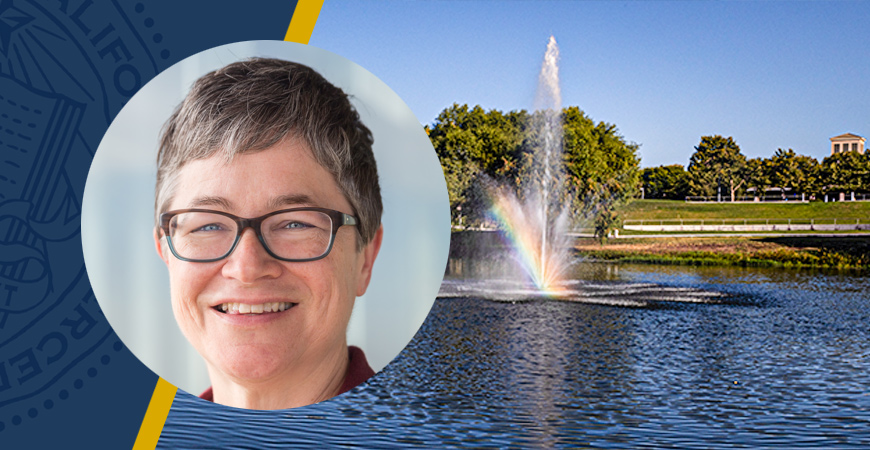 Sociology Professor Nella Van Dyke is an expert on social movements in relation to hate crimes and has studied far right-wing movements.

Social justice movements and conspiracy theories have become a hallmark of our time, but how do we know which inflammatory statements are legally protected and which are not?

Sociology Professor Nella Van Dyke sheds light on the legal and social ramifications of free speech in this Q&A. Van Dyke is an expert on social movements in relation to hate crimes, with recent studies of the movement against sexual assault, college student protest, LGBTQ+ college student experiences and racist hate crimes on campus. Her work has been published in leading journals including Social Forces, Social Problems and the American Sociological Review. She has co-edited two books: “Strategic Alliances: Coalition Building and Social Movements” and “Understanding the Tea Party Movement.”

Van Dyke joined UC Merced’s sociology department in 2008 and is a founder of the department’s undergraduate and graduate programs. She teaches courses in sociological theory, hate crimes, sexuality and statistics.

The Constitution itself does not define free speech, but the First Amendment of the Constitution says “Congress shall make no law respecting an establishment of religion, or prohibiting the free exercise thereof; or abridging the freedom of speech, or of the press; or the right of the people peaceably to assemble, and to petition the Government for a redress of grievances.” Because of this, every person in the United States has freedom of speech.

Because of the First Amendment, most speech is protected in the U.S., but not all types.

Speech that threatens another individual, defames their character in a manner that causes damage, is considered obscene, incites violence or creates a hostile environment is illegal.

There is no question that racist and other bigoted speech is harmful to marginalized students and harmful to the university as a whole. The problem, however, is that hate speech is difficult to define. Some colleges have enacted anti-hate speech policies, but ironically, these have almost always ended up being used against the students they were intended to protect.

If we allow authorities to enact laws against hate speech, they may use these laws against those seeking social justice. For example, during the 1800s, many Southern states in the U.S. made it illegal to speak out against slavery because they said it would incite violence. While it is understandable that many members of our community would like to see hate speech banned either on campus or by state or federal governments, these policies are unlikely to hold up in court, and we have to be careful about how much power we give authorities over us.

The courts are very consistent in their rulings on free speech. Decisions and definitions of what speech is allowed do change over time, but not very quickly, and challenges that go against established precedent are not very likely to succeed.

UC Merced’s principles of community call for all of us to treat one another with dignity and respect, and to be civil when engaged in dialogue. Therefore, we should all try to avoid speech that dehumanizes, disparages or hurts another person. In terms of what is legal, we have more freedom. Legally, we should avoid threatening a specific individual with harm, trying to get others to commit crimes or acts of violence, or repeatedly using hate speech around an individual or particular group of individuals. However, we can all do better than that by following UC Merced’s principles of community and encouraging others to do so.

Only government entities are required to follow the direct limits imposed by the Constitution. Private actors must follow the law, but not the directives described in the Constitution. Public universities must therefore allow free speech, including hate speech. Private institutions, including businesses and private colleges and universities, can enact policies limiting speech, including anti-hate policies. Private citizens can do what they’d like in private (e.g., at home), as long as they obey the law. When they are acting within an institutional space, they must follow the rules of the space. Thus, an individual at a public university has the right to free speech and cannot get penalized for hate speech (unless it includes a direct threat or otherwise breaks the law), while someone on a private college campus could face disciplinary action for hate speech if it violates the campus’ speech policies.

As a private company, Twitter has the right to decide what content or users it wants to allow. Therefore, legally it had the right to suspend Trump’s account. Twitter states that it banned his account because it determined that his tweets violated its policy against the glorification of violence. Twitter decided that his tweets “could inspire others to replicate violent acts and determined that they were highly likely to encourage and inspire people to replicate the criminal acts that took place at the U.S. Capitol on January 6, 2021.” It’s also possible that Twitter was concerned about liability because it is illegal to provide resources to those aiming to overthrow the U.S. government and it is illegal to participate in inciting violence.

Social media users can do research on the platforms’ terms of service and posting policies. Users should be aware that even if they have the right to post almost any content, the platforms have algorithms that decide what content to promote. Facebook’s algorithm, for example, promotes content that evokes strong emotions, and therefore has been found to amplify conspiracy theories and fake news. Twitter, Facebook and Tiktok have all recently released information about their algorithms in an effort to increase public trust, and users can find these online. Ultimately, I’m not sure anyone can be 100 percent certain that their right to free speech is being fully respected, because these are private companies that are not bound by the First Amendment.